Here is everything you need to know about how to cook canned oysters. Whether it’s on the stove, in the oven or on the grill, we've got you covered.

We’ve even got some ideas for you if you don’t want to cook canned oysters at all.

Don’t forget to check our FAQ section at the end. Enjoy!

Canned oysters are very practical, as you can have them on hand when you need them. And as you’ll see below, there are many ways to cook canned oysters.

Fresh oysters? The only thing you might want to do with these is grill them.  Apart from that, the world is your oyster (I couldn’t resist that one!)

Just a note before we get to the details, if you do eat fresh oysters, be careful where you get them from, as they can be a source of harmful bacteria. To be on the safe side, cook them or buy canned oysters.

Canned oysters on the stove

There are lots of ways to cook canned oysters on the stove. You can:

For a quick dinner, try stirring some canned smoked oysters into some fresh linguine with a creamy sauce. Yum!

If you love eggs, pop your oysters in an omelette. Easy!

Just be sure to avoid adding additional salt to your recipes, as canned oysters are salty on their own.

Canned oysters in the oven

There are many choices as to how to cook canned oysters in the oven:

If you want to use fresh oysters

Oysters on the grill

You don’t need to grill canned oysters as they’re already cooked. But if you’ve got yourself some Chesapeake Bay freshly shucked oysters, this is how you do it:

Pop them, shells and all, onto a hot grill (cupped side down) and remove them when the shells pop open. Easy! And you don’t even need a shucking knife.

If you do have a shucking knife and you want to grill fresh oysters, they’re tasty with a drizzle of your favorite herbed butter or sauce. Just grill them for 5-6 minutes.

Don’t have a grill? Not a problem! You can steam fresh oysters, either in or out of the shell.

If you’re wondering how to steam oysters in the oven, it’s very simple. Arrange the oysters in a single layer on the flat rack of a roasting pan. Pour 1/3 of an inch of water into the pan, and put in the oven heated to 475 degrees for about 7 minutes. You’ll know your oysters are done when the shells have started to open up.

Here are some other things about oysters that you may not know.

Can you boil oysters?

Yes you can! Here’s how:

Make sure your oysters are fresh – that the shell is closed and they don’t smell too fishy. If the shell is even slightly open, or they smell very fishy, they may not be safe to eat and should be thrown away.

Fill a small pan 2/3 full with water. When the water is boiling, tip the oysters into the pot.

Once the shells begin to open, leave them in the water for another 3-5 minutes.

Drain them in a colander and rinse with cool water, discarding any oysters that did not open.

How are canned smoked oysters made?

Canned smoked oysters: First they are shucked, and then put in brine and boiled. Then they are spread on trays and put into a smoker. Once they are smoked, they’re mixed in oil – vegetable oil or olive oil – and put into jars or cans, where they are heated to high temperatures and then sealed.

Do canned oysters have less nutrients?

Canned oysters actually have more nutrients than the fresh ones. Both canned and fresh oysters have B vitamins, but canned oysters also have vitamin C. Why? Because of the acid that is added in the canning process.

Fresh and canned oysters also have all 9 essential amino acids. And they’re rich in omega-3.

Do you have to cook canned oysters?

No. If you were wondering how long to cook canned oysters, the good news is you don’t need to cook them at all. You don’t even need to heat them. You can open the can and eat.

If you’re really in a hurry, pop them right onto some saltine crackers! You can do this with canned smoked oysters too.

Or toss some canned whole oysters with a green salad and a light vinaigrette. Delicious!

Can you eat canned oysters every day?

Well, you could, but it isn’t a good idea. Oysters contain a lot of sodium as well as zinc, and you could find yourself with a mineral deficiency if you were to eat them every day.

Do oysters have mercury?

Yes they do, but oysters contain lower levels of mercury than other types of fish.

Why are canned oysters banned in California?

Canned oysters are not banned. They are for sale in California. The confusion came about because of California Proposition 65 concerning the presence of lead and cadmium which has been known to cause birth defects or other reproductive harm.

Seafood supplier Crown Prince published recently that their canned oysters and clams “have been tested and found to contain amounts of lead and cadmium slightly above the Proposition 65 limits, but well below the FDA guidelines.

You can read more about this here.

Do you chew or swallow raw oysters?

Fresh oysters are best consumed by chewing them to release the flavor inside the muscle. If you swallow them whole, you won’t get any flavor apart from a bit of brine, which is hardly worth the trouble of opening them up!

What can I do with jarred oysters?

You need to cook them, as they are not meant to be eaten raw. Pan-fry them, broil them, bake them… basically any dish where you would use canned oysters works just as well for jarred oysters.

Make sure they’re within the expiration date. Check the smell and the color: they shouldn’t smell fishy, but rather salty. The oysters should be a light tan color. They may have traces of red or green bits depending on their diet. If you see any pink bits, don’t eat them! They may have picked up a yeast.

What are the best canned oysters? 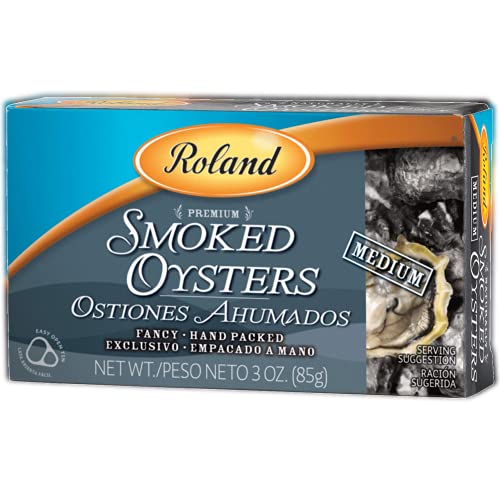 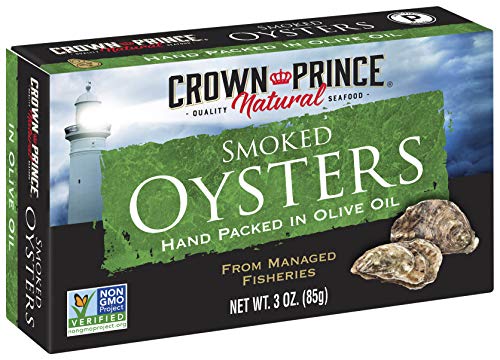 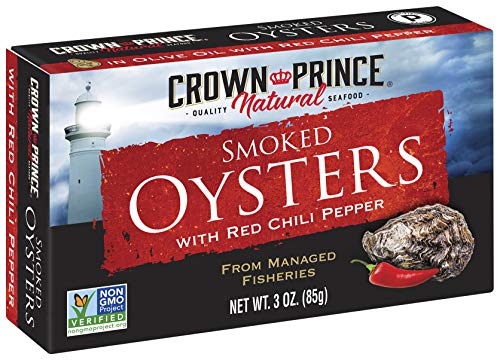 $56.02
View on Amazon
And for those who like it hot, try Crown Prince Natural Smoked Oysters with Red Chili Pepper.

Can you get sick from canned oysters?

As long as they are within their sell-by date, canned oysters are safe to eat straight from the can. Fresh oysters carry a higher risk of carrying bacteria.

How long can you keep canned oysters?

Canned oysters will keep for 3-5 years if properly stored, and possibly longer than that. Once you’ve opened the can, store any unused oysters in the refrigerator in a glass container with a lid, where they will keep for 3 to 4 days.

Can you freeze oysters?

You can freeze your oyster casserole, pie or other cooked dish, just as you would do with other foods.

Fresh oysters can be frozen, but must be done properly.

If you want to shuck them first: Shuck them into a container, saving the juice. Discard any bits of sand or shell (you can rinse the oysters if you wish) and freeze with the juice in sealed freezer bags.

Note: frozen oysters are NOT to be eaten fresh when defrosted. They must be cooked.

If done properly, your oysters will keep in the freezer for up to 6 months.