Would you say you know your way around a kitchen?

Whether you’re new to cooking or your friends joke that you need to star on your own cooking network television show, there’s always something new to learn in the kitchen! That’s what makes the world of food so exciting.

If asked, would you be able to explain the difference between a pot vs a pan?

There is at least one big difference between these two essential cooking utensils. But, we’ll cover all the differences — great and small.

Read this article and you’ll be prepared to answer that question (and more!) like a total Master chef!

What Is a Pot? There are a few features that we can agree typically make a pot:

Variations of pot names include: saucepan, stockpot, and dutch oven. Normally, a pot size has to do with which name it goes by.

What Is a Pan? When we are discussing pans, these are the most common features:

When Does a Pan Become a Pot?

That one big difference between a pan vs. a pot?

It lies in the height of the cookware. In the previous section, we mentioned pans are typically broad and shallow. Most of them are under three inches tall (though there are some saute pans that reach closer to four inches).

Once a pans’ sides reach over that four-inch mark — you’ve basically got yourself a pot!

Other ways to tell the difference can include the angle of the sides (frying pans generally curve and pots are straight), or if it’s deep enough to boil a box of pasta (then it’s probably a pot).

Is your cookware getting old?

If you have dented, scuffed, or warped pots and pans — it’s high time you thought about replacing them. Read How To Buy the Best Cookware Set for Your Money before you shop!

Why Is It Called a Saucepan?

One exception to the pot vs pan rule — the saucepan.

Some saucepans are deeper than four inches, but they aren’t called a saucepot. Saucepans are the ones you likely grab when you’re looking to fix up a box of macaroni and cheese! They’re smaller than a stockpot and very efficient at boiling water (or other liquids!).

They have one long handle and you can cook in them with or without a lid. They have steep sides, making them very good at heating liquids evenly.

They’re technically a pot, but the original name that was given to them when they were invented (to cook sauces!) seems to have stuck.

Are you in need of a new saucepan? Check out this affordable Non-stick Hard Anodized available on Amazon.

Generally, saute pans are a bit deeper with straighter walls and a lid. You can use them — as the name suggests — for sauteing vegetables and searing meats.

A fry pan is shallower, with angled sides and no lid. Great for frying up eggs and bacon for your morning meal! Skillets are very similar to frying pans, but often run a bit larger and come lidded. And then there are cast iron skillets, which are heavy-duty. You can even use them in ovens for baking! Scientific studies show cast iron cookware to be especially beneficial for those at risk of iron deficiencies.

Here’s a durable skillet to add to your kitchen arsenal! 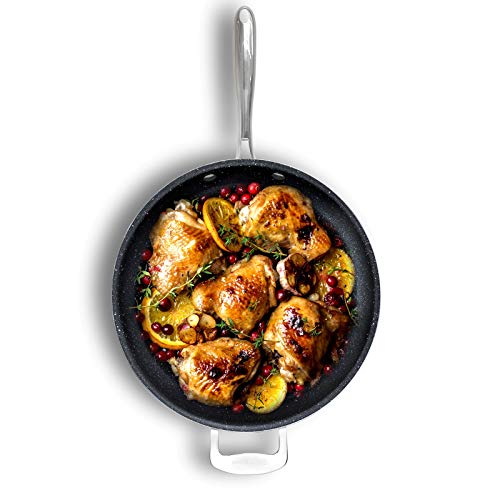 What Is a Stockpot?

Stockpots are the big dogs of the kitchen cookware. On the lower end, they hold about eight quarts. But you can buy stockpots up to 40-quarts!

You can use either a saucepan or a stockpot for deep frying foods.

This dishwasher-safe 8-quart stockpot from Cook N Home works on every stovetop (including induction) has a lid and is oven-safe up to 500 degrees! And if 8-quarts is too small for you, you can size up to the 16-quart option. 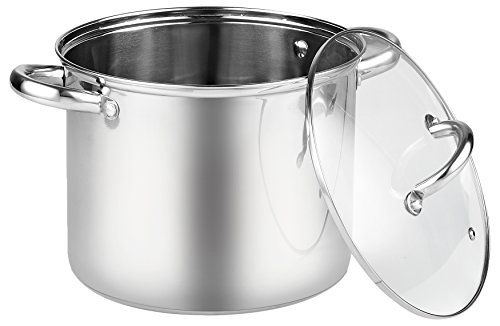 A Dutch oven is a popular variation of the stockpot. They are usually shorter, but they boast thicker walls and heavy tightly-fitted lids. They are favorable for braising meats as well as making hearty soups and stews. You can use them on top of your stove or in your oven! 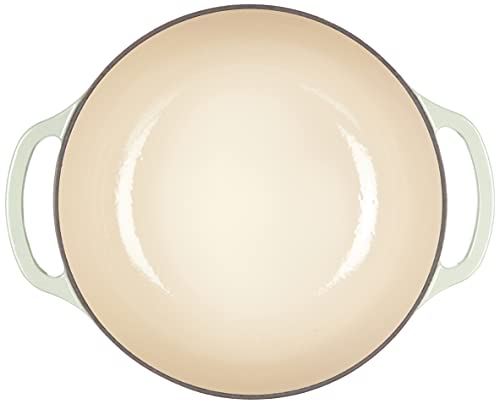 If you’ve always wanted your own Dutch oven, Click on the image to check out the fun color options on this Lodge 6-quart.

Now that you’ve got the general idea of the big difference between pots vs pans, we hope you feel more confident in your culinary skills!

If you’re in the market for new cookware to whip up family dinners, you might be interested in checking out the brand T-Fal. They offer many affordable, nonstick products to help you take healthy eating to the next level.

Take a look at these Reviews of the Best T Fal Ceramic Cookware Sets for 2021.